Okay, so what has happened over the last month?

Well, we have a date for the home opener!  October 19th!  It’s a Saturday.  I’ve also heard that we’ll be playing every team in our conference this year….so we’ll see the Rochester Americans for the first time since…since I don’t know….since Ryan Miller was their goaltender maybe?

– Kevin Henderson, Joe Piskula, and Victor Bartley have all been signed.  The first two on two-way contracts, and Bartley on a one-way deal.  That’s another feel good story for us here in the developmental leagues…  Another undrafted guy that developed right here in Milwaukee, and all of a sudden is getting second defensive pair minutes with he Predators.  I’d like to be the Nashville scout that saw him and convinced Poile/Fenton to take a chance on him.  That’s got to be extraordinarily rewarding.

Henderson and Piskula were unrestricted free agents, so it’s going to be nice to have them back in the fold again.  I would predict that Henderson splits time with Milwaukee and Nashville as needed, and Piskula will provide some good veteran leadership here in MKE.  He was a nice stay-at-home defenseman for us, and from a marketing standpoint…can we really have TOO MANY former Wisconsin Badgers on the team?  I don’t think so.

– The Predators signed a goalie from their 2012 draft class, and I’d say there’s a decent chance we’ll see him in Milwaukee this year.  Start learning how to pronounce “MAREK MAZANEC”.  It’s a two year entry level deal for the goalie from the Czech Republic.  Another tall one…6’4, and he catches with the right hand.  Another good project for Mitch Korn, as he plays his first North American minutes this year.

– Restricted free agents:  David Poile told Josh Cooper of the Tennessean that they sent a qualifying offer to Nick Spaling, but that they had not decided whether to do so for Matt Halischuk or Jon Blum.  Qualifying offers are due on July 2nd.  If they don’t sign those two or send qualifying offers, they’ll become unrestricted free agents.  We certainly have fond memories of Halischuk this year, as he was by far the best player on the ice when he was in Milwaukee for his conditioning assignment.  Why the delay in deciding?  Poile gave a nice quote to explain:  “Blum and Halischuk, at different times, have been really good for us, but I would probably like to make some changes.  That’s why I’m trying to keep the door open at least a little bit so I can see which other teams might have some interest so we can get something back.”

– In a trade that may have snuck under your radar, the Predators traded pending RFA forward Bobby Butler to Florida for pending RFA and defenseman TJ Brennan.  Brennan is a 6’1 left handed shot who split time last year between the Rochester Americans, Buffalo Sabres, and Florida Panthers.  The Sabres traded him to Florida for a 5th round draft pick in March.  Panther GM Dale Tallon said the following at the time:  “T.J. is a young and mobile defenseman with a hard shot, who we are pleased to have acquired.  He is a hard working player with an offensive upside, who has averaged almost a point-per-game in the American Hockey League this season.”

Brennan was selected 8 picks after Jon Blum in the 2007 NHL draft.  We’ll see over the next week if he gets an offer sheet…I’d imagine he’d have to…they traded for him, right?  And depending on the numbers in Nashville, he may be ticketed to Milwaukee.  We’ll see.

We know Juuso Puustinen will be playing in Finland this year.  And we know he’s a rap star too.

– Nashville has elected to continue its ECHL affiliation with the Cincinnati Cyclones.  Because you know what they always say….the road to Milwaukee goes through Cincinnati.

Annnnnnnnnnnd the NHL draft tomorrow.  Will any of these kids be old enough to play in Milwaukee next season?  We’ll see.  Keep an eye on the twitter and the Predators blogs for news.  Section 303 is on location for the draft, so look for some good coverage there.

– And finally….Do you follow Scott Ford on the twitter?  If you do, you may have seen this great photo.  It’s nice that former Milwaukee players like to come back here to visit.  His Yonkness, Calder Cup winning Triston Grant, and Fordo.  Drinking ginger ale, I imagine.  Right? 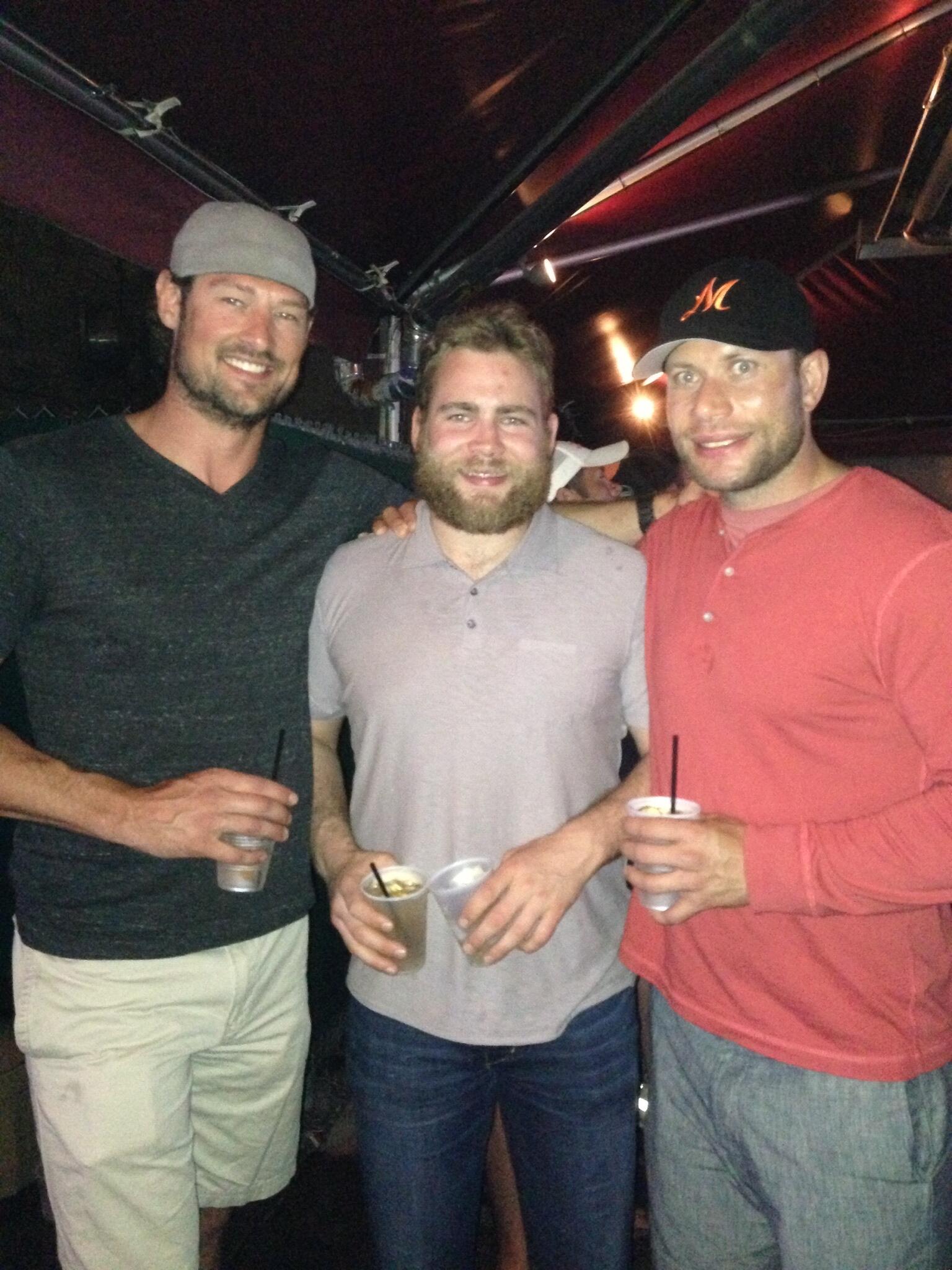 6 thoughts on “Dusting Off The Old Blog”