Daniel Lavender, Editor-in-Chief: Prior to joining Admirals Roundtable, Daniel Lavender was a public relations intern for the Milwaukee Admirals. As he learned: public relations is a very concise way of saying you are doing everything. After finishing up hefty work with the team, which included several contributions the Milwaukee Admirals 35th Anniversary campaign, he was given the opportunity to stick around the team and continue his passion of writing and following Admirals hockey.

Lavender is a graduate of the University of Wisconsin-Parkside. In 2012, he graduated with a bachelor’s degree in English and a certificate in Sports Management. At Parkside he was the main sports reporter and executive editor of The Ranger News. The favorite sport of his to cover at UW-Parkside was the women’s soccer team – where he also did color commentary for WIPZ student radio. Lavender has also been published twice as a poetry editor with Straylight – UW-Parkside’s literary arts magazine.

Fun Fact: Daniel’s father was born and raised in England. Half of his family lives across the pond and, as such, has contributed to his love of Formula 1, English Premiership Football, and more British-y things like Doctor Who. The reason behind “Doctor Lavender” is a nod to his love of his English family. 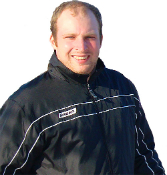 Jason Karnosky, Contributor: In the words of Hall of Fame hockey coach Bob Johnson, “Today is a great day for hockey.” Jason Karnosky believes every day is exactly that: a great day for watching, playing or covering hockey. Those are the words he’s lived by since he first laced up a pair of skates to traverse the frozen, snow-covered ponds of the Upper Peninsula of Michigan. Jason carried that lifelong love into his past work as a writer for the Wisconsin State Journal and the Milwaukee Admirals, among other organizations. His hockey writing has appeared in such publications as USCHO.com, theAHL.com, Predators.NHL.com and allpuck.com. However, Karnosky’s favorite place to talk hockey is with other devoted puckheads here on the Admirals Roundtable.

As far as his Admirals interests, they date back to the team’s IHL glory days of the 1990s, when Karnosky took in many an IHL contest either at the Bradley Center, or at his family’s favorite venue, the Arizona Veterans Memorial Coliseum in Phoenix (home of the L.A. affiliate Phoenix Roadrunners). During Karnosky’s undergraduate days, he along with a few fellow hockey fans made the trek east on numerous occasions to catch stars like Tony Hrkac, Shea Weber and Pekka Rinne among others.

Karnosky owns a Masters degree in Journalism and Mass Communication from the University of Wisconsin, graduating in the spring of 2010.

One thought on “Roundtable Staff”