A new season looms in the American Hockey League (AHL) and another new alignment and set of rule changes have been implemented. The AHL’s Board of Governors have approved a new alignment for the league in the 2016-17 season as well as a change to numerous rules and even some twists to the way the game will look after Christmas.

SPRINGFIELD, Mass. … The American Hockey League’s Board of Governors has concluded its 2016 Annual Meeting, held this week at Hilton Head Island, S.C.

The Board has approved the following items to be implemented beginning in 2016-17: 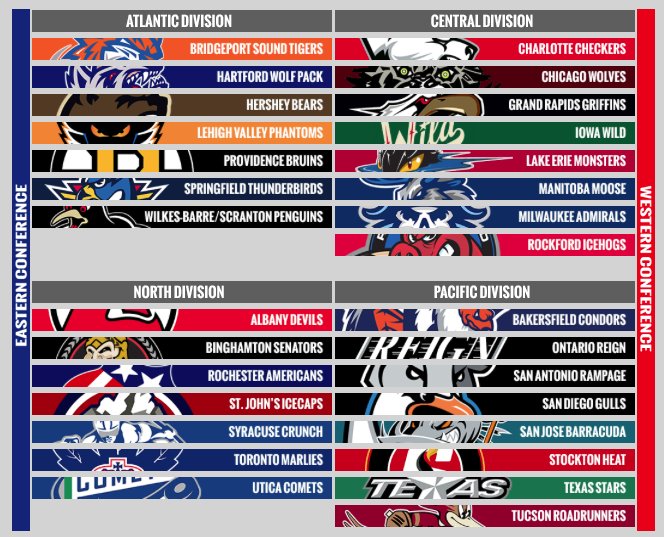 Playing Schedule/Standings
• The 2016-17 regular season will consist of 1,116 games, played between Oct. 12 and Apr. 16. All teams will play 76 games each with the exception Bakersfield, Ontario, San Diego, San Jose, Stockton and Tucson, who will play 68 games each. The full league schedule will be announced later this summer.

• Teams will receive two points for a win and one point for an overtime or shootout loss. The top four teams in each division ranked by points percentage (points earned divided by points available) will qualify for the 2017 Calder Cup Playoffs.

• The 2017 Calder Cup Playoffs will feature a divisional playoff format, leading to conference finals and ultimately the Calder Cup Finals. The division semifinals are best-of-five series; all subsequent rounds are best-of-seven.

Rule 46 (“Fighting”)/Rule 23 (“Game Misconducts”)
• Players who enter into a fight prior to, at, or immediately following the drop of the puck for a faceoff will be assessed an automatic game misconduct in addition to other penalties assessed.

• In any instance where the opposing player was assessed an instigator penalty, the fighting major shall not count towards the player’s total for this rule.

Rule 82 (“Icing”)
• In addition to not being permitted to make player substitutions, the offending team on an icing violation also may not use its team time-out.

Rule 1.10 (“Ice Cleaning”)
• The ice cleaning procedures used during promotional timeouts will also be used prior to overtime during the regular season, replacing the “dry scrape.”

In operation since 1936, the AHL continues to serve as the top development league for all 30 National Hockey League teams. More than 88 percent of today’s NHL players are American Hockey League graduates, and more than 100 honored members of the Hockey Hall of Fame spent time in the AHL in their careers. In 2015-16, over 7.1 million fans attended AHL regular-season and playoff games across North America, the highest total attendance in league history.

Really, things aren’t going to be all that drastically different than the 2015-16 season. As far as rule changes go in regards to fighting, icing, and dry-scrape? They are all really being done to keep the pace of the game fast. I feel the “staged” fighting off the face-off being met with a game-misconduct is a good call. Eliminating a team from calling a timeout after an icing, paired with the lack of a substitution, makes taking that icing that much more of a punishment. And the dry-scrape? I’ve always loved saying it – but they’ve made a simple fix of it that means getting overtime off and running far faster.

All things told there aren’t many things here that are seen as drastic changes. If anything it feels like some small streamlining efforts. The one thing I find comical is the uniform change midway through the season. I don’t know why, if there has to be a change, it can’t just be done instantly. Some purists probably still feel the NHL should have teams wearing white uniforms at home and now that is being scrapped mid-season in the AHL. If you’re trying to act like big brother and wear dark at home? Just make that the norm from opening puck drop. Seems funny to have a mid-season, “Oh, and by the way, don’t forget you need to switch home and road uniforms now.” For all the streamlining it just amuses me that they left a gaping wrinkle like that in.

Thoughts on the AHL’s new alignment and rule changes for the 2016-17 season? Are you happy to see fighting being clamped down more in the sport? Any disappointment that the Pacific Division, despite gaining a newcomer out West, still aren’t playing a full 76-game schedule?