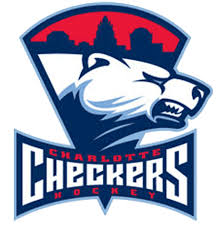 Charlotte in the Midwest Division?  Geographically, it’s a bit of a stretch, but we’ll make it work.

It’ll be nice to see some fresh blood at the Bradley Center this year, for sure.  The Charlotte Checkers are the AHL affiliate of the Carolina Hurricanes, and in their first year in the AHL last season, they went on a phenomenal playoff run.  They drew the defending champion Hershey Bears in the first round, and upset the champs in six games.  They drew the best team in the east, the Wilkes-Barre/Scranton Penguins in the next round, and disposed of them in another six games (here’s the box score for game 6….what a 3rd period!).  In the conference finals, they ended up being swept by the eventual Calder Cup winners, the Binghamton Senators.

For some more insight on the newbies in the conference, I sent some questions over to Jenni at the Chasing Checkers blog.

Admirals Roundtable:  How has the city of Charlotte embraced hockey, and how has the team embraced the city?  Do you find yourself defending the stance that hockey can survive in southern cities?  Does the newspaper give the team the time of day?  Local news?

Chasing Checkers:  Hockey first arrived in Charlotte in 1956, when the Baltimore Clipper’s barn burned down, and the team needed a place to play the last few games of the season.  The fans were so receptive to it that the team officially moved here the following season, and soon changed their name to the Checkers. The Checkers changed leagues a few times, most recently to the AHL after spending the previous 17 seasons as a member of the ECHL.  In a city that boasts an NFL team, an NBA team (who are both pretty terrible, I might add), NASCAR and AAA baseball, hockey often gets the smallest billing, but we are the only team that consistently has a winning record.  Our fans are pretty devout, and with only one year of the AHL under our belt, they’ve come a long way, and the fan base is growing by leaps and bounds.

Youth hockey is alive and well in Charlotte, and with our parent club only a few hours up the road in Raleigh, there is a lot of crossover between our AHL and NHL squads.  Charlotte is a great city and a great place for hockey.  The players love it here, and love the fans.  The team does a lot of outreach and community programs.  At our playoff rally in May, every player showed up, and even other local sports celebs (NASCAR drivers) to support their team, and none of them were asked or required to be there.

Unfortunately, the Checkers hardly get any true media coverage locally.  One local news-only TV station covers the team pretty regularly, but the Sports Director is a former hockey player so he is biased in a good way.  During the playoffs, the local newspaper didn’t bother sending a reporter to cover games, and even had the nerve to pick up a story written by a college student at Wilkes University, where he was editor of the school paper and the beat writer for the WBS Penguins.  I was horrified our Charlotte paper hired a college kid and Pens guy to write articles about our team in the playoffs!

AR:  What style of play did the Checkers employ?  Were they a high flying offensive machine?  Did they rely on their defense, goaltending, and toughness?

CC:  The first half of the season, the Checkers were a powerful offensive machine, with lots and lots of high scoring games, but they kind of refined themselves as the season passed by.    Our playoff run (until the final round) was filled with low scoring and no scoring games.  We had a battle of goaltenders, with Mike Murphy taking the reigns as our number one guy in the late months of the season, and he carried the team to the Eastern Conference Finals.  Murphy will be back this year, sharing time between the pipes with Justin Peters, who spent last season with the Hurricanes backing up Cam Ward.  We have a group of great, young prospects who are fast, and offensively powerful.  I wouldn’t say we relied on toughness. Our team enforcer and fan favorite Zack Fitzgerald is probably not going to return, but we have a new guy to fill his shoes in former Connecticut Whale tough guy Justin Soryal.  The team is a lot of fun to watch!

AR:  Do you expect that a lot of folks from last year’s playoff team will be back again this year?  Who are three players that should be on our radar?

CC:  Carolina tends to use their AHL team as a truly developmental team.  The Checkers rarely make big-name minor league signings just to boost the AHL club.  Last season, for example, all but two of our regular players were under contract with the Hurricanes (and we had another 3-4 guys on Carolina contracts who played in the ECHL).  We had a trio of young guys – Zac Dalpe, Zach Boychuck and Drayon Bowman, who all spent a lot of time in Raleigh, and it’s expected that 1-2 of them will make the big club out of camp. Other than that, the majority of our core is returning.  Our defense is very young, but very skilled.  Picking just three players is tough, but I’ll give it a shot!

Chris Terry – This will be his third season in the AHL, after playing for the Plymouth Whalers of the OHL.  He’s a defensively minded left wing who was also our leading goal-scorer, and ranked third in the league with 34 goals scored.  He’s a natural leader, and my personal pick for 2011/12 team captain.  He was dominant on the power play, and a big part of what made Charlotte’s PP so successful.

Justin Faulk – Faulk is a rookie this year, having spent the last two rounds of our playoff run with the team this past spring.  An American defenseman, he just turned 19, and after completing hisfirst year with the University of Minnesota – Duluth, decided to turn pro.  I guess when you win an NCAA title as a freshman there isn’t much more to accomplish at the University level!  He’s an incredible skater, and while I haven’t see him play THAT many games, each one impressed me a bit more than the last.  He’s definitely going to be a player to watch.

Brett Sutter – The Hurricanes like to collect Sutters… they’ve drafted two cousins (Brandon and Brody), and picked this one up in a trade last year with Calgary.  Brett is a center who really took off during the post season, racking up 14 points (4G, 10A) in 14 games played.  He’s a physical, in-your-face kind of player who skates hard, and plays even harder.  I really feel like this is going to be a break-out year for him.

I would have included Jacob MicFlikier who was with Charlotte last year on an AHL contract, but since he hasn’t re-signed YET, I can’t talk about his awesomeness.  Other honorable mentions of the “top three” to watch include netminder Mike Murphy and defensemen Michal Jordan, both who are entering their sophomore seasons.

AR: Do you have reservations about joining the western conference?

CC:  Honestly, I think it’s going to be a good opportunity for the Checkers.  In their inaugural season, they played in the toughest division in the league, and faced Hershey, Wilkes-Barre and Binghamton a total of 24 times.  Binghamton of course ended up winning the Calder Cup, and Hershey and WBS were arguably two of the top-teams in the league all season.  Moving to a division where only one team (Milwaukee) had a comparable record to our own should prove to be an advantage.  The Checkers are used to flying to most of their games (they did a lot of “Fly to Boston, bus to New England” trips), so that is nothing new.  I think playing teams with more recognizable cities like Chicago and Milwaukee will be good for Charlotte, too, simply because our media and some fans are still a bit green and might pay more attention than when we play teams based in Glenn Falls or Binghamton, NY.  I just hope that with challenges of time zones, extra travel, etc., that the AHL gods give us a favorable schedule, much like the ones they seem to give Rochester each year, that will allow us to continue to play in the Eastern conference some.

AR:  What prompted you to start your blog about the Checkers?

CC:  I have a professional background in sports, and always loved writing, and with the lack of regular media coverage on the team, I figured if I wanted to have info about my favorite team, the only way to get it was to find it myself.  I never dreamed how much the blog would take off, and that I’d meet great people from all over the country because of it.  It’s been a lot of fun.  It’s still a learning process… navigating the world of credentialed media, trying to provide readers with credible and interesting stories, etc., all the while having a crazy schedule and job that often takes me away from the breaking stories I’d love to cover, but I’m loving every minute.  I was only able to attend one road game last year, but hope to get to a number of them this season, and have plans to “cover” the preseason Hurricanes game from our prospect’s perspective.  I have a lot of ideas, and some things in the works for next season that will hopefully bring even more exciting things to my fellow fans in Charlotte!